New restaurant in the City – but don’t be glad about it! 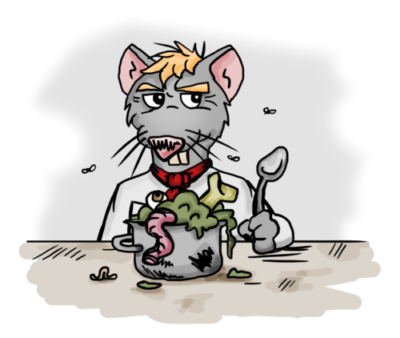 I don’t really enjoy going to restaurant openers, but who else would they invite, after all? I’m too much of an expert when it comes to food, let’s be honest! I was again greeted with the mandatory welcome drink, as you might expect when dealing with a celebrity like me. The waiter had this mean look on his face much resembling that of Jargon Ratto’s at the end of another productive business day, but I don’t want to spoil him with more flattering words, so let’s roll on already!

Waiting is not my strong suit—I loathe waiting, truth be told! So I got up to check on the kitchen—I put on a nice little apron and fixed their mischiefs! There were plenty, I tell you! The chicken was so raw that a better veterinarian could have saved it, while other parts of the kitchen brought the shame on even the most vicious indigenous fire offerings! There was this little blue fishy battered so hard it went senile, constantly asking if we saw its friend—it jumped off four times of the plate before I finally split it in half with a cleaver. The stew had so much alcohol in it that you had to drink it from a champagne glass. The soup was like a volcano, dry as ash but hot as lava! The pig was so undercooked that is was still scared of the wolf. The mushrooms were probably poisonous, for anyone who ate them started running around looking for the princess. On the other hand, the cooks really deserve a commendation! They didn’t go easy with grease, and slapped modern, excruciating diets in the face!

If you ask me, we’d be better off without this one, but there’s nothing to do now…